Looking for the best practice amp for under $100 can be a confusing experience. Guitar Center alone carries over 100 such amps for less than $100. It’s easy to see why choosing which guitar amplifier is the best for your money can be difficult. 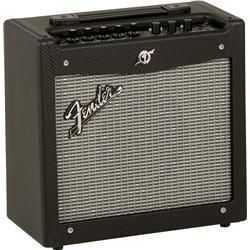 I realize $100 may not seem like a lot to some people, and in the world of guitar amplifiers it really isn’t that much. But for the aspiring guitarist just starting out or the hobbyist, 100 bucks can be a good chunk of change.

Many practice amps in the under $100 range are frankly not worth the money. The Fender Mustang I is the exception. In fact, I think it is hands down the best modeling amp for under $100. Here’s why.

The Mustang I practice amp is a 20w combo modeling amp with a 1 x 8″ speaker configuration. It’s plenty loud for a practice amp, but sounds sweet with the volume down low too. It also has a headphone jack, so you won’t wake the neighbors / wife / kids etc…

Modeling amps are all about effects and modeling different amp configurations, so it’s not surprising that one of the major aspects that differentiate one amp from another is what presets are available on the amp.

The Mustang I amp features a total of 24 different presets, in 3 colored groups – green, amber and red. Each group has 8 presets, labeled A, B, C, D, E, F, G, #. The factory presets follow a steady progression from vintage ’57 Tweed Deluxe to increasingly heavier sounds up to more modern, metal based amps (think Mesa Boogie and Diesel).

The range of these stock presets is enough to provide hours of enjoyment, playing in a range of styles from early Elvis Presley and Buddy Holly to Hendrix and Deep Purple to Ozzy and Metallica. It also does a good job of jazz and blues, and you can always dial back the effects to get those renowned Fender cleans.

Not satisfied with the preset? Think the sound is close, but not quite right?

No problem. The Mustang features knobs to control the Gain, Treble, Bass, Volume (of the amp being modeled), Master Volume, Effects, and Reverb/delay.

Still not totally happy with the mix?

No problem. The Fender FUSE software opens the door to complete customization of sound.

Perhaps the one feature more than any other that sets the Mustang I above other modeling amps is the Fender FUSE software.

FUSE allows you to edit and tweak all the settings of an amp that are available through the top panel knobs and dozens more that aren’t. FUSE lets you to add and configure effects modeling (stompbox and rack mount) to the base amp preset. It enables you to tweak the EQ settings and effects settings and save them to the amp using one of the colored presets. It even lets you choose and configure different cabinets to model.

You can hear the changes you make in FUSE immediately on your amp, so you can fine tune all the various aspects to get the sound right with your guitar. Once you like what you hear, you just select a preset to save it to and you’re free to rock out without your computer.

FUSE doesn’t stop there though. There’s a whole FUSE community on the Fender forums where owners share their favorite presets for others to download and try. There is a multitude of different presets available for modeling various styles, bands and amp brands.

From Jazz to Blues to Rock to Metal, capturing the sound of AC/DC, Zeppelin, Clapton, ZZ Top, GNR, Metallica, Hendrix or .. frankly whatever guitarist you want is a snap with FUSE.

Once you’ve downloaded your favorite preset or built your sound rig from scratch, you save it to one of the 24 amp preset slots. After that, switching from Angus Young’s acidic rock tones to Clapton’s vintage blues is as easy as turning the knob.

Although the Mustang’s modeling of a vintage tube amp may not be 100% accurate in all cases, it’s close enough so that most people will be hard pressed to tell the difference. And those who can will likely not being playing a solid state, modeling amp to begin with. ;-)

FUSE let’s you backup your current amp presets at anytime so you are free to customize and tweak, secure in the knowledge of that backup safety net. Totally hosed your preset? Can’t stand the settings on your amp anymore? no problem, just restore the backup and that ugly episode never happened.

FUSE gives the Mustang owner the keys to the kingdom in terms of controlling their amp. It gives you full control of the modeling and sound, and it keeps things fresh and exciting. That’s also what makes this a great amp for the hobbyist. If you find yourself stuck in a certain style of play, just fire up FUSE and give your amp a makeover, or download a new community preset. It’s amazing what a change in sound will do to your playing style.

It is because of FUSE that I believe the Fender Mustang series of amps is perhaps the most versatile modeling amp on the market today.

The Mustang controls let you choose from a variety of different effects using the 2 knobs on the top: Mod and Delay/Reverb.

That’s the basic way to flavor your sound with a touch of effect, but the FUSE software really blows the doors open on adding effects.

Here’s how the virtual effects work on FUSE:

You can chain up to 4 different effect types together to sculpt the sound you want.

The 4 effect types are:

So, you can create an amp preset with 1 stomp, 1 mod, 1 delay and 1 reverb effect all linked together. Furthermore, each effect setting is fully configurable – just like a real effects pedal, or rack effect.

Here’s a further breakdown of the effects:

To be honest, adding the virtual effects to the amp modeling via FUSE is not as flexible as a standard stompbox because that effect is then on the preset always, whereas if you use a pedal effect you can easily toggle it on and off. But the Fender Mustang, as with many modeling amps, isn’t meant to replace pedal effects completely. Besides, you can always create a stripped down amp model and attach your stompbox as you would with a non-modeling amp.

I think most people will agree though that the multitude of effects available on this amp is quite generous for the $99 price.

The Mustang also comes with Ableton Live and IK Amplitude software programs. These are studio software for recording, mixing and arranging music. You can add drums or stings to the background of your recording. You can even alter the tone of your guitar sound – yet again – with Amplitube.

Check out this most excellent demo of the Fender Mustang I:

If you’re just starting out learning to play guitar, you probably want to skip modeling amps entirely, and get a very good, very basic guitar amplifier.

But once you’ve mastered the basics and you’re looking to take your playing to the next level, take a look at the Mustang I. The possibilities open to the guitarist with this package are astounding, and all for just $99!