Fender Mustang 1 vs. Peavey Vypyr 15 – which is the better modeling amp? They are so similar that it may be difficult to choose.

If you’re looking for a new modeling amp and have a budget of $100 you’ve probably asked yourself this question. It’s easy to see why – two of the best selling modeling practice amps at this price point are the Fender Mustang I and the Peavey Vypyr 15. As I write this, each retails for $99 new, and has loads of features. In fact at first glance, they are so similar that it may be difficult to choose one over the other.

Here’s a guide to help highlight the specific strengths and weaknesses of each and help you decide which is best for you. 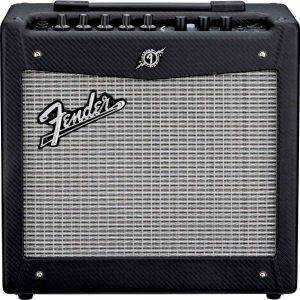 The Mustang I has 24 total amp presets. They consist of 8 different amp models, each with 3 different effects and mod settings. Each of these presets allows for custom effects and reverb/delay settings as well as EQ volume and gain control.

Both support headphone out, and MP3/CD/Aux input. Both also feature a single 8″ speaker, a tap tempo switch, and 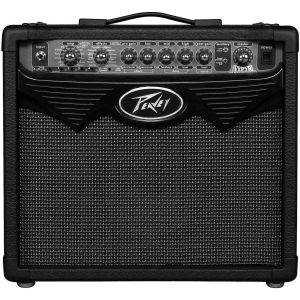 The Mustang I features Fender FUSE software that allows for tweaking the living hell out of the amp and the Mustang’s modeling of a vintage tube amp is very close to 100% accurate.

Now with the basics out of the way, let’s dig into the details.

The Mustang I has 5 knobs:

Even though there is no knob for Middle EQ, the Mustang I is so customizable that you will rarely miss it.

While the Mustang I does not have a separate channel for clean and dirty, you can use any of the presets to store a clean preset and another to store a dirty preset.

The Peavey Vypyr 15 is a bit more customizable through the front knobs, but the Fender Mustang I provides much greater customization through it’s software package. More on that later.

Fender Mustang 1 vs Peavey Vypyr 15 – Which is a better 1st amp?

Neither the Fender Mustang I or the Peavey Vypyr 15 really makes a good choice for your first amp if you’re just starting out learning the guitar. This has more to do with modeling amps in general, than either of these specific amps.

If you’re looking for the best amp for beginning guitar players, look at straight, traditional amps and skip the modeling. You can always get an effects pedal to add on later, once you’ve become a better player.

If, however, you already know how to play acoustic guitar and are looking for a great 1st amp to branch out into electric guitar playing or you’re looking to get into a more sound variation with a modeling amp, then the Mustang I is the best choice in my opinion. It’s also a great choice for a practice amp or if you’re looking for an amp to play while song writing.

However, if you’re only interest is Metal or you wouldn’t use the Fender FUSE software and you’re looking for a rock solid modeling amp for Metal that will suit your needs out of the box with no additional effort beyond the occasional turn of a knob, then stop reading right now – the Peavey Vypyr 15 is for you.

Some Peavey Vypyr 15 owners have complained about a lack of “clean distortion” and muddy clean tones. This sort of criticism is limited with the Fender Mustang because you can overcome almost any such problem with the FUSE software.

In my opinion, the Mustang I has better tones – overdrive and clean – and playing dynamics than the Peavey Vypyr 15, which makes the Mustang a much more flexible amp. And that’s before you factor in the FUSE software!

I believe that Fender has raised the bar on modeling amps, while maintaining their fabled Fender cleans. The Vypyr 15, however, missed the mark on delivering a good clean tone.

Still, many Vypyr owners swear by them, but most tend to be heavily into metal. The Peavey Vypyr 15 is a great amp for playing metal or hard rock but if you even think you want to play other styles, then the Mustang I is the better choice.

What really puts the Mustang ahead of the Vypyr is the software package that it comes with. The Mustang comes with Ableton Live and IK Amplitude, but what truly makes it rock your way is FUSE. FUSE is where the Mustang series amps leave the competition in the dust.

What you can’t edit and tweak with the top panel control knobs on the amp itself, you can edit to your liking with the FUSE software package, then save it straight to a preset on the amp.

Along with the ability to fully customize your amp’s sound, FUSE also enables you to download presets from the fender site and owner’s forum. There are hundreds of community created and supported presets for a variety of popular bands and musical styles.

FUSE gives you – the owner – full control over how your amp sounds, but it also keeps it fresh: Stuck in a rut? Feel like you just keep playing in the same style? Just download a preset that’s out of your comfort range and experiment with something new. Don’t like it? No worries, just overwrite it with another one, or go back to the factory presets. It’s this ability that makes the Fender Mustang the amp that keeps on giving.

FUSE opens up a world of possibilities and puts you in control of virtually every aspect of the amp.

Some have said the Peavey Vypyr 15 is a waste of money and you shouldn’t look at anything less than the Vypyr 30. The Vypyr 30 though is about twice the price of the Vypyr 15, so in my opinion if that’s even an option than you should really be comparing the Vypyr 30 and Mustang II amps.

Personally, I think if you need to spend an extra $100 to get “anything resembling good tone”, then you’re probably looking at the wrong product. I say this because the Fender Mustang I truly does deliver good tone at the same price point as the Vypyr 15.

Others have been critical of the speaker choice for the Vypyr 15, saying that 8 inches is too small. This of course depends on what you plan on using the amp for. I’d say it’s definitely too small for performing a gig, but it’s plenty big for practicing at home or in an apartment. The Mustang I has the same speaker size, but few owners complain about it’s volume. I suspect this is because Vypyr 15 owners tend to be looking for a louder sound, while Mustang I owners are looking for better tone and more versatility.

The Peavey Vypyr 15 is a solid amp for metal and hard rock right out of the box, but the cleans are not as good as the Fender’s Mustang I and it lacks the versatility of the Mustang. If you have no desire to play blues, jazz or classic rock then the Vypyr 15 is a good choice. If you’re looking for maximum versatility and excellent tone, then the Fender Mustang I is the choice for you.